This one’s a really simple one, but I did it so now you have to read about it.

I’d always wanted to play with RGB pixel strips, I never realized how easy it was. You’ll need an ESP 01, LED board and some LED strips. It’s much cheaper to buy four 1 meter strips than it is to buy a single 4 meter strip, plus you end up with a whole bunch more 3 way connectors this way. 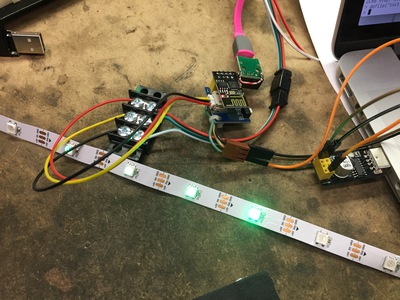 I also soldered an old 3 pin fan connector to the GND, RX and TX pins so that I could program it while it was connected up. In future I’m ging to replace the connector on one of my serial programmers with Stackable pin headers so I can just put it between things. 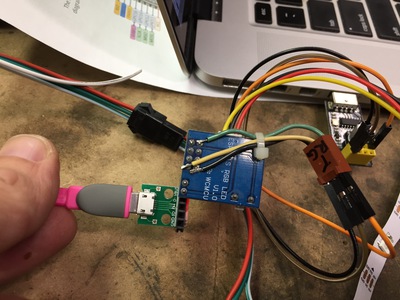 I really didn’t want to write much code, I just wanted to see the blinken lights working to prove to myself that I could do it, I didn’t have a particular project in mind for these, but it’s good to know they’re available now. While looking for code I found ChilliPeppr. It’s neat, it’s a web IDE that talks over websocket to a little server that talks to your serial port to program your devices. It seems slow, but a super neat idea. I’m happy with my development environment so I didn’t bother, but I did lift the sample code from the bottom left box on that page. It might have been easier to write my own code, that sample code seems to use a different ws2812 api where you can provide the pin and the data which my firmware didn’t like. Plus it seems to be full of unreachable code branches. I got my lights working in the end though! Now to think of some projects that will actually use them.

I moved my code around a little bit now that I have two projects in there. So I have a wifi directory with the wifi stuff in it that both projects can use.

My LoRa boards arrived so I’m going to play with those next. I also have some OLED screens to play with so maybe they’ll feature in the LoRa project.