I’ve wanted to try First-person view (FPV) flying. You put a camera and a transmitter on your plane and see what the plane sees via a screen or goggles. If the goggles support head tracking you can even put the camera on a gimbal with some servos and as you look left and right so does the camera! Maybe one day I’ll get a set of sky03o goggles but for now of course I went with the cheap option which is the $38 ROTG02 and that included a little camera with a transmitter too. 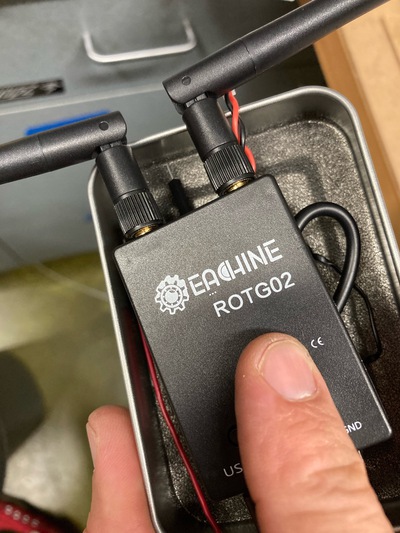 I can plug this into an old Android phone and it looks to Android just like a plug in webcam. Add in the go FPV app and it works perfectly. I did put a strap on an old Google cardboard and even added some padding but then I found you can buy better VR phone holders for around $10 on eBay so I got a Tzumi Dream Vision Pro 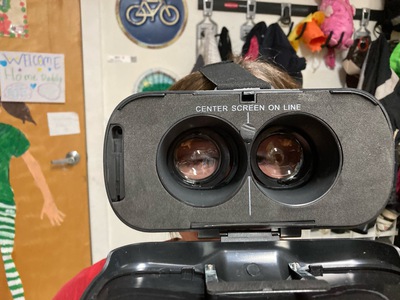 They make your eyes look goofy when you look in where the phone goes. You can adjust th lenses left right and focus them forward and backward, I was impressed. 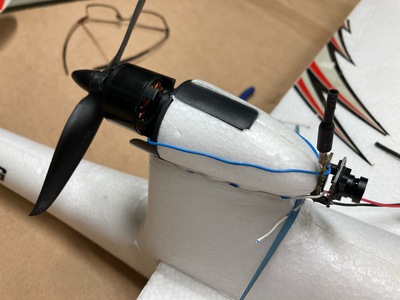 I wanted the camera to point forward but my propensity for slamming the plane nose first into the ground stopped me putting it on the nose of the plane. I chose to mount it here which was a spectacularly bad idea.

I got out to fly and have the goggles on my head ready to go, launch the plane get it up nice and high and I’m gliding around and then put the goggles on and it’s pretty amazing. It’s a little static-y but then again it’s only a 25mW transmitter and I have no idea at all how high the plane is, it’s so hard to work that out just by seeing what the plane sees. I’m worried the plane is getting too low and so I turn on the throttle to climb and instantly the screen turns to all static. Now the problem with FPV is that dumb old you with your nerd goggles on is stood in a field looking one way, but the plane could be anywhere around you and I had to rip the goggles off then in a panic look around and see if I could find my plane before it flew away too far and I couldn’t see it. I did this a few times but it was too nerve wracking for me.

I think for a while I’ll only be flying FPV with someone else on a buddy box to bring the plane back or just have them look at the footage. After my first battery I decided that I would use the recording capability and just record some video for you, but when I plugged in the camera it started to make the magic overheating electric components smell and melting the foam on my plane so I quickly unplugged it and figured I’d just blown up the camera and transmitter anyway. Strangely when I got home it seemed to work fine, but the wires were certainly all melty. 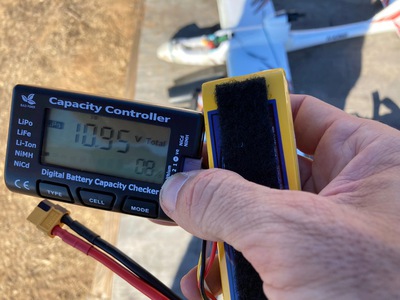 Finally my battery meter came in and on a recent flight I managed to get 30 minutes of flying from one 3s 2200 battery. I try and climb and then glide as much as possible but when I finally landed the battery was at 8%. It’s not good to drain LiPo batteries that low so I don’t think I’ll be flying for quite that long on a single battery again. I used to fly for 20 minutes at a time, maybe I’ll bump that up to 25. 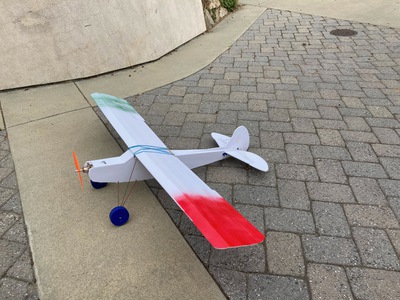 Here’s the FT Storch finally all finished and ready to fly, We taxied it up and down the street a little but we didn’t take off. Those wheels are made out of Costco cat litter jugs. Still not maidened it yet hopefully soon. 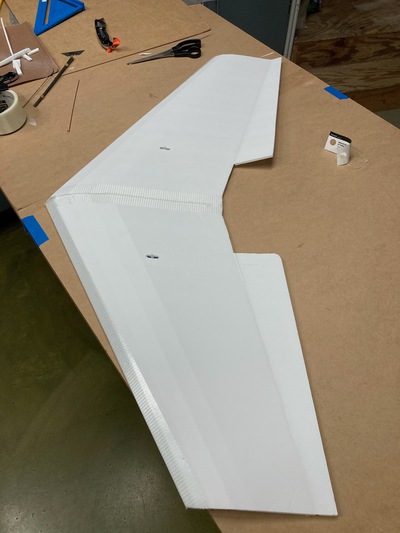 My second Flite Test foam board plane build was a Versa Wing but as a pusher (with the motor on the back). It went together really easily and it was mostly finished after one day of working on it. I cut out way too much from the plans since they had me cut holes for the servos on the bottom, but for a pusher you want the servos on the top and I feel like I could leave the bottom half of the paper in for the spar holes. I also think I’ll fold and glue the spars before I cut the rest of the spars which should make them more even. My next Versa is going to be so clean looking! 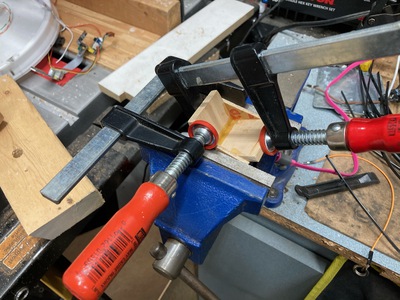 I built my own motor mount using thick and thin paint stirrer wood and some wood glue. It feels like it’s strong enough, time will tell. My friend also printed me up some motor mounts so I’m excited to try those. 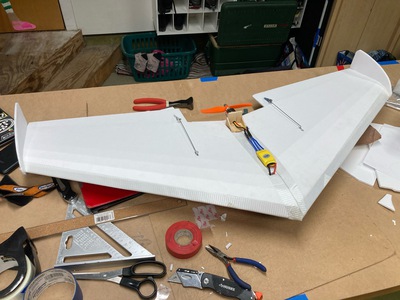 I got a little too rushed when I built it and totally forgot to put in the WS2812 LED strips I had planned to add. Oh well. since it’s only $2 of foam board I can build a new one anytime. I’m very pleased with how tidy the motor mount is. 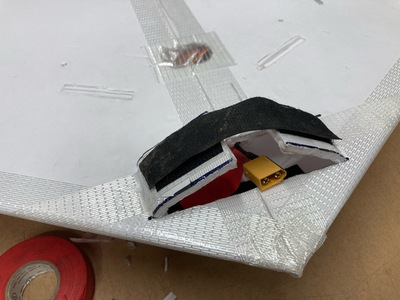 The battery fits right in the front and we’ll see if it manages to stay in there with all that Velcro. You can also see the holes that the wing spars fit into. I think I can leave the foam board paper in place and make that much tidier in the next version. Also those center of gravity holes are huge and ugly but I didn’t know what the hole was for when I was making it from the plans. I also want to add FPV to this as well, but the camera and TX that I bought are reserved for the Mini AR Wing that I’ll talk about in another post.