I made a Hangar Simple Stick! Mine was slightly different because I didn’t have any long wire for a control rod so I put the servos further back in the tail. This adjusted the CG so I had to move the wing 1” back to compensate. 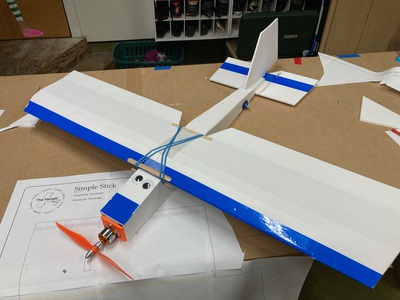 The googly eyes really helped with the CG and give it personality. I didn’t use a Flite Test power pod (removable motor tray), I just glued in a 3D printed motor mount (Thanks Ernst!). Changing the battery required taking off the wings AND pulling up the bit with the eyes on. It’s pretty annoying. Once the plane got a bit more “worn in” (i.e. crashed). I just stared tucking the eye bit under the wing. 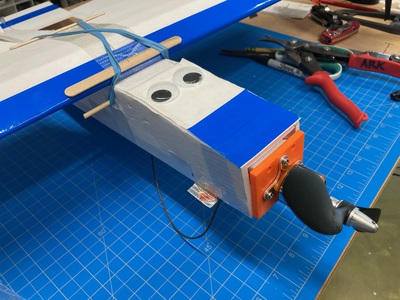 I burned through quite a few propellers since it’s right at the front and I didn’t have any landing gear at all. I put these skids on made from flag stakes and it helped quite a bit. 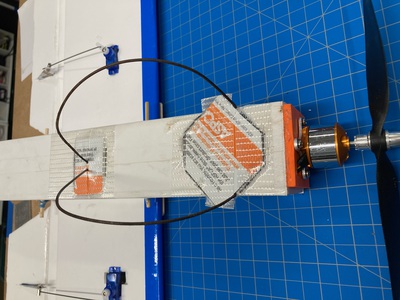 This plane is the funnest to fly of all my planes so far. It’s very quick to move and flights in a very straight line. just point it and it keeps going. It will fly straight up and climb until it’s just a teeny dot and then you can glide down for ages under no power. It’s so maneuverable that it felt like it could do anything. Well, not quite, I put it in a full throttle, full speed dive and then pull out of it at the last moment and promptly folded the wings. I’ll admit I didn’t have a popsicle stick to make them stronger but I don’t think it would have helped. It flew great even with the wings folded and when I got it safely to ground I was able to fix it by sliding an old fiber glass tent pole inside the wing. You can see it in this photo.

The tent pole weighs 41g. I could use an old aluminum arrow shaft which would only be 10.7g. With the tent pole the plane weighs 460g with everything but a battery. 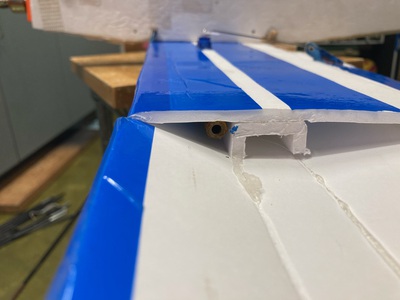 Here’s some video of the Maiden Flight.

I’ve flown this a lot, it fits easily on my backpack and is nice and quiet and fun to fly. I’ve also crashed it A LOT and it’s stood up to the beating especially well. We’ve done streamer battles with this and the Storch and even had a midair collisions and flown away from it like nothing happened.

The biggest drawbacks are how often I break a prop and also changing batteries is kind of annoying.