Each plane I build i seem to like more than the other. I loved the slow and stable Storch more than my first plane. The Versa was fast and zippy. The Hangar Simple Stick flew like an arrow, fast precise and very fun to fly. We’re not going to mention the P47 for some time yet.

When I set out to build my simple stick I really wanted to build the Flite test one but even though they had it in the store the plans were not available yet. There were two choices for other easily findable simple stick planes. The Hangar and the JB. I built the hangar one since it looked way simpler. I was intrigued with the JB one since it looked more like the Flite test plane and had a symmetric wing. A symmetric wing would fly equally well right side as well as upside down.

So I cut it all out and started building it. This time I even remembered to put neopixel LEDs into the wing. 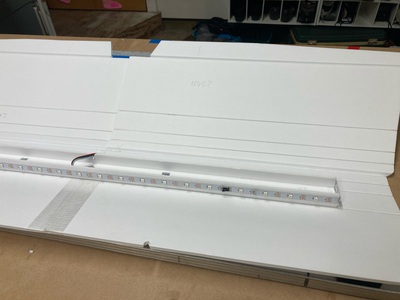 I can control the exact color of each little LED individually. So these two on each wing tip can be a different color. 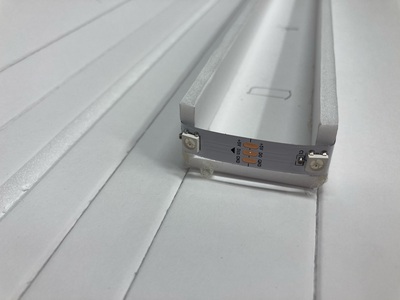 I don’t have a great setup for controlling the LEDs yet so I just plugged in the board that powered up my xmas tree so here’s how that color scheme looks inside a plane. I put a ring of lights around the motor which looks super sweet in the shiny metal casing. There’s lights down the left and right of the body at the tail with a single LED pointing directly backwards. Finally there’s a short strip under the front of the fuselage. I used the regular LED connectors that came with the strips which ended up being a bit bulky in the end. 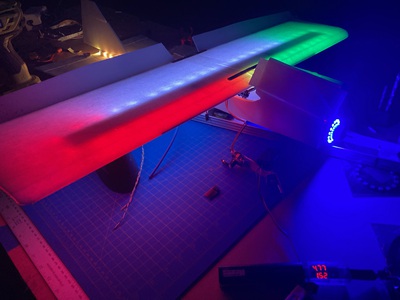 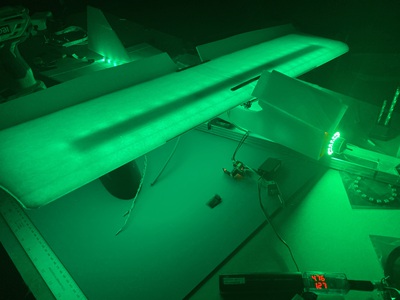 I still have no idea what I’m doing with landing gear so I built this skid like thing with survey flag wire. All I’m really trying to do is save the prop when I come in for a landing. I also added a 2mm carbon rod into the leading edge of the wing on the inside of the bevel cut to hopefully stop the wings folding. I didn’t like the servos for the tail sticking out of the body on my Hangar simple stick so for this one I put in a few guide tubes and ran control rods to servos mounted inside the body as far forward as possible. It looked really tidy from the outside. 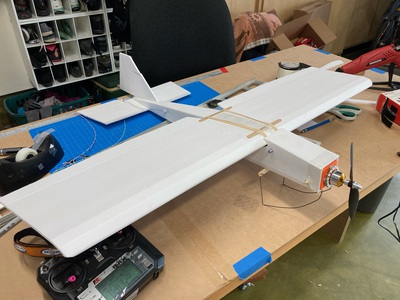 The Maiden when really well, it flew really nicely and I even flew it up high and did some inverted flying and it flew well upside down.

The First Landing also went well with the kooky landing gear helping to keep the prop in one piece.

This JB Simple Stick with all the LEDs ended up weighing 495g without battery. For comparison my Hangar simple stick once I’d added the old tent pole to reinforce the wing after folding weighed 460g.

I really liked the smooth lines of the top of the plane, the wing being recessed into the fuselage is a nice look. The bottom of the tail is also flush with the fuselage which is another thing I like but maybe makes it more likely to be damaged during landing? Many of the cuts in the plans, especially at the front ended with cutting away and removing 10mm of foam from the paper, then you would glue and fold over the paper flap to cover up the exposed foam edge, this ended up looking really nice but was a bit annoying to make. The chord of the wing (leading to trailing edge distance) seemed really large compared to the hangar but I measured it and it was actually the same.

The biggest drawback with this plane is how annoying it is to change the battery. You need to take the wing off and I still don’t feel comfortable with less than 4 elastic bands (2 parallel with the fuselage and then 2 crossing). Taking the wing off means it’s still connected for the ailerons so it’s hard to deal with. With my Hangar simple stick I was able to make the top of the front of the fuse slide under between the wing and the BBQ skewer that held the elastic bands. It got a little worn over time but it made battery changes super simple.

I’m also not a fan of the tail and rudder being split like they are with part of the rudder moving the top of the tail.

And then we had a bit of a whoopsie. I’d walked up to where we fly and because I walked I only brought one plane. Well I get the battery in and decide to check the control surfaces and the elevator was barely moving at all. I could hear the servo moving inside but the elevator didn’t. I took the wing off (which is annoying to do) and saw that the servo inside had pulled the paper off where it was glued and was flopping around. I should have gone home, but instead I taped the servo in place and figured it was good enough. It was good enough for a while, but then my plane suddenly dipped down while I was flying overhead and slammed at full throttle right into the side of a shipping container. It made the loudest bang! 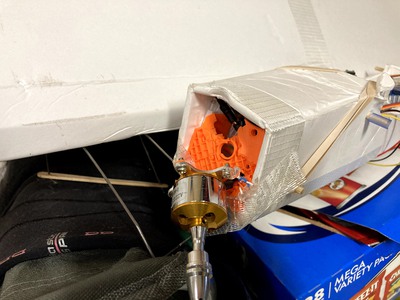 I was impressed with how little damage seemed to happen. The 3D printed motor mount died and one of the neopixels fell off the motor ring but the motor looks like it might still work. There was a bit of a dent in the tail end of the fuselage, it seems weaker than the Hanger stick. You can see where the servos came off the side of the fuselage I’ll have to work out a better mounting system when I fix this. 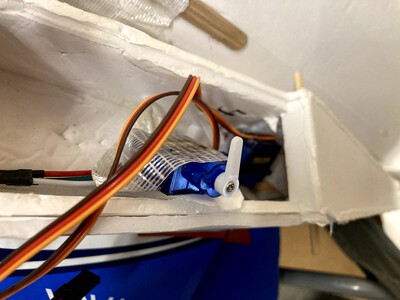 I haven’t put it all back together yet but it looks really fixable and I’m hopeful I’ll get it to fly again.